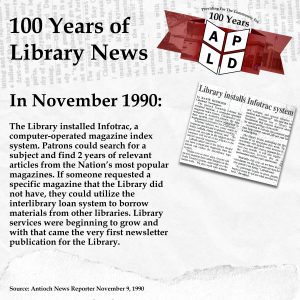 The Antioch Township Library has installed infotrac, a computer-operated magazine index system. Contained in one computer at Antioch library, the data base system runs nation wide, and it’s headquartered on Foster City California. “Infortrac indexes two years worth of magazine articles and is updated monthly,” Kathy LaBuda, library director said. “The patron can just type in the subject and the computer will list all of the articles in the nation’s popular magazines.” LaBuda added that if the library should not have a particular magazine, then the patron can utilize the interlibrary loan system. “Within two or three days, anyone can receive materials from other libraries in the (Lake County) system, state-wide or even nation-wide. We also work with schools and colleges, and special libraries, medical and corporate.” She said that for instance, Amoce has a library in Northbrook that features material about the national geology of the earth. According to LaBuda, the computer and database system runs $4,200 per year for a subscriptions. The library is also publishing the first edition of its newsletter this week. The newsletter will include what services the library offers and what is planned for the next two months. It will also highlight the difference between this year’s performance and last year’s performance. “Basically, this year, as we have more circulation, we also have more services (for the patrons) tax dollar,” LaBuda said. “As patronage begins to grow, people begin to come in and see what services we have,” she added.