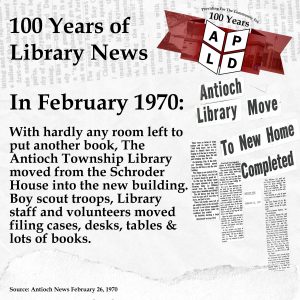 There were no horns or noise makers and no band to play “Auld Lang Syne,” but in one place in Antioch there was a ringing in of the new or more precisely a carrying from the old and bringing into the new. On Saturday, Feb. 21 the Antioch Township Library moved from the old library into the new building. This began a new period of history for the library, one that all of Antioch should be proud of. On this day the Library under the expert direction of its head librarian, Betty Lu Williams moved from the re-made old home into the beautiful new library. The old Library had long out-lived its time and it was time to move, and just in time. There was hardly room left to put another book in the old building and it was almost impossible to run a good library under the conditions that existed. On Saturday morning a large number of adults and students began the job of moving a library. They moved books filling cases, desks, books, tables, books and books, and more books. A big job, but one that Miss Williams, her staff and the library board had been looking forward to for sometime. By 2 p.m. that afternoon the last book was out and into the new building. The job of putting everything in order remains and not until March 9 will the new building be open to the public. Sometime later this spring or early summer a grand opening is planned when all the new equipment ordered is in and Betty Lu and her staff have had time to work out the bugs of running a new Library. When the public visits the new building they are going to find a beautiful new building both inside and out. One that has lots of room, well lighted, very quiet, and a joy to be in. In fact, Antioch can boast of having one of the best libraries in Lake County. Be sure to plan to visit it. There isn’t another place that can compare in all of Antioch.