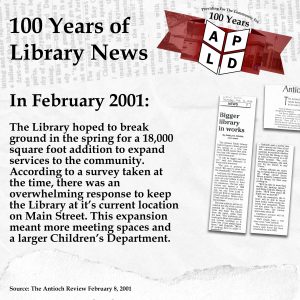 The Antioch Public Library District hopes to break ground this spring on a new, two level 18,000 square foot addition that will expand services to the community.

“It will be bigger and better,” said Ann Kakacek, library board president.

“The area is growing so much. We need to grow with the community,” she added.

Last year, the library passed an ordinance that enabled it to issue up to $3 million in alternative revenue bonds to fund the expansion. The last referendum was passed in 1988 and raised the library corporate tax rate from $.143 to $.235 per $100 of equalized assessed valuation. Before then, it has been 30 years since the last increase.

The new addition will be located at the site of the current parking lot. Ultimately, patrons will enter the library from the north rather than the west. “The architects are working to blend (the addition and current building) so it looks like it has been there,” said Kakacek. “We’re all working hard to make it wonderful.”

Kakacek said a survey was taken around the time of the last referendum posing the question to residents whether they’d like the library to stay in town or be moved to a different location. The overwhelming response, she said, was for the library to stay “home.” Library officials are counting on being able to purchase the village owned scout house property, located south of the library, for their new parking lot.

“We’ll be able to more than double the parking spaces.” Said Kathy LaBuda, library director. “We’ll have about 60. Right now we have 25.”

With the expansion, the library will be able house more books, audio visual materials and computers. There are also plans for a 150-seet meeting room. The current space seats about 30.

Children’s services will be broadened as well.

The tentative date for the library’s open house has been scheduled for June 2002.