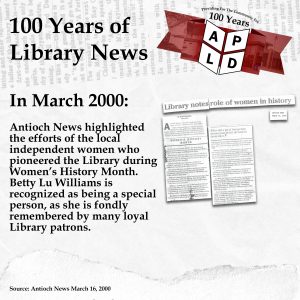 On the backs of their efforts, the first library opened at 934 Main Street, in what was then the Walter Chinn’s Newspaper and Magazine Shop.

The Antioch Library is recognizing the efforts of these local women, and other pioneering women on the national level, during a celebration of Women’s History Month this month.

Library officials have put up with a variety of displays, and plan to include works by women authors to round out the observances.

For many old-times residents, and some relative newcomers as well, there’s one special women associated with the library: Betty Lu Williams, one of the earliest librarians.

Williams passed away about seven years ago, but her connection with the library is so strong that mail addressed to her as the librarian still arrives at the library on occasion.

Williams’ family was one of the most prominent in the early days of the village, producing one of the fledging town’s first postmasters and also one of its earliest and most popular general stores, which is still in existence today as an antique shop.

But Betty Lu Williams’ passion was the library. She started as a librarian in 1942, when the library was housed in an old farmhouse on it’s current site at 757 Main Street. She served for just a few years then, but returned to the post later and retired in 1982.

Barbara Weatherby, administrative assistant at the library who grew up in the Antioch area, remembers many a day when Williams would trek across the street from her home on a snowy day to open the library because someone wanted to use it.

In the library’s early days, books were donated by the community, and a card party hosted by Mrs. W.H. Howe helped raise money for the effort. It was open two days a week, with the women serving as volunteer librarians.

Library records also show that a scarlet fever epidemic in the Library’s early years made it necessary to destroy all the books on hand and start from scratch.

In 1922 the library moved to the second floor of Antioch Village Hall, then located at 875 Main Street. With the police department and jail on the first floor, that made the common librarian’s admonishment of “Quiet please!” somewhat difficult to enforce at times, with prisoners often rattling the bars.

Over the years, the library moved several more times, eventually being taken over by the village in 1926. In 1930, the library moved to the Antioch grade school, located at the corner of Main and Depot Streets. The library became a township library is 1937, and has been financed with property taxes since that time.