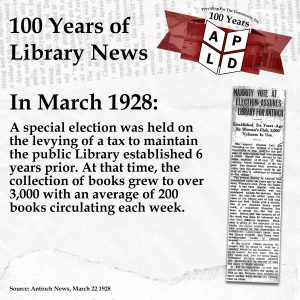 Established Six Years Ago by Women’s Club, 3,000 Volumes In Use.

The special election held last Thursday on the levying of a tax of nine-tenths of one mill for the purpose of establishing and maintaining a public library was carried by the large majority of 90 over 17.  The election board consisted of six women who donated their services in order that the election could be carried on with a minimum of expense to the village. The present library in Antioch was established about six years ago by the local Women’s  Club. From the beginning it has been popular with the young people and adults who are numbered among its patrons. Each year the club has added many volumes to the library at this time there 3000 books with a circulation of two hundred books every week. A competent librarian has been in charge for the last 2 years. Before she was secured all the work was done by volunteer services from different members. Much care is given to the selection of the books. The Choice usually being from lists prepared by the association of librarians. Last week’s cards from the library showed that there were 78 books in Antioch homes. At the annual village election the voters will be asked to vote for a library board of 6 members: two to be elected for one year, two for two years, and two for three years. Here after at each annual election two members will be elected to take the piece of those retiring. It will be impossible to levy and collect this tax before the Spring of 1929 so the women’s club expects to carry on the work during the coming year as usual.