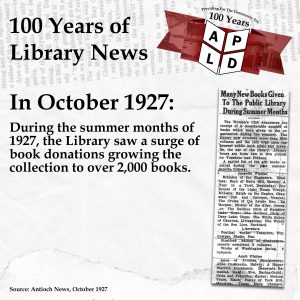 The Women’s Club announces the receipt of a considerable number of books which were given to the organisation during the summer. The library now numbers more than 2000 volumes and the club urge upon the general public both adult and juvenile, the use of the library. Library hours are from two to five o’clock on Tuesdays and Fridays.  A partial list of the gift books  Received During the past summer months follow:

Juvenile fiction
Brandon of the Engineers, Bindless; Boys of Babs Hill, Burton; A Year In a Yawl, Doubleday; Boy Scouts of The Light Horse Troops, Mclean; Ralph on the Engine, Chapman; Cab and Caboose, Monroe; The Cruise of The Lively Bee, De Morgan; Mickey of The Alley, Sweester; The Outdoor Girls of Rainbow Lake, Hope; The White Queen of Okeyona, Livingstone; The Wreck of The Sea Lion, Stoddard.