Sew Your Own Face Mask 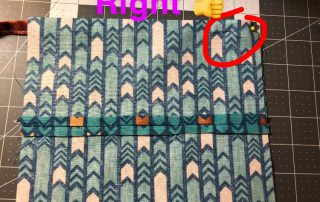 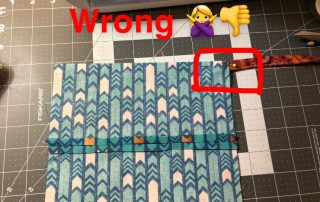 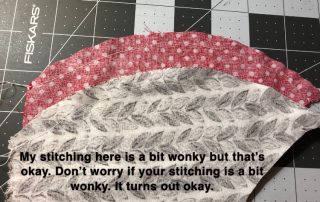 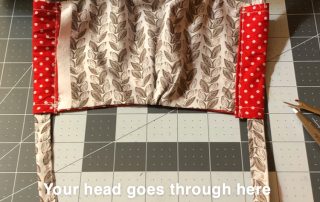 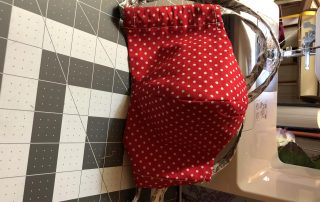 Have you all missed our It’s Sew Easy Class? We’ve certainly missed you guys, but that doesn’t mean we can’t sew together. With the COVID-19 situation still going on, the CDC has recommended that we start covering our faces whenever we go outside. (Remember, stay at home as much as possible!) I thought this would be a perfect way to stay safe and also practice our sewing. As a beginner sewer myself, I was worried that making these masks would be difficult but actually, they are pretty easy to make! Today, I am going to show you two different ways to make a face mask: The classic pleated face mask and the shaped face mask.

I used this tutorial by Hobby Lobby:

The reason that I decided to go with this tutorial was because it was really easy to follow. With this pattern, you just need to sew straight lines, which makes this tutorial more forgiving if your stitches are a little wobbly like mine are. The hardest part of the tutorial is sewing through the pleats. The pleats kept on stretching out while I was sewing. I realized that I needed to make sure that I held pleats firmly together as I was sewing them or else the machine would want to feed only one layer of fabric instead of the bunched pleats. Remember that you need to take out the pins as you sew. You can’t leave them in or else bad things will happen like having the needle break and have the broken needle potentially fly into your face.

One area where I had to stray from the video was when I was making the straps for the mask. I don’t have elastic at home but I did have extra fabric. This is how I made them:

2: With an iron, press your strip of fabric in half to leave a crease in the middle.

4: Do the same as step 3 with the bottom edge of the fabric

5: Now that the edges of the fabric are now meeting in the middle, you can fold the strap in half and iron it so that it stays in that position while you are sewing.

6: About 1/4th of an inch (or less) away from the edge on the open side of the strap, sew it closed. Don’t forget to back stitch at the beginning AND the end to secure your stitches. (I kept forgetting)

7: For the end not attached to the mask, you can finish them off two different ways: the easies way is just to sew it off like you did the rest of your strap (pictured above), or you could unnecessarily torture yourself like I did and do it the fancier way by folding the end twice and sewing over that thick bit. (I had the hardest time trying to feed that little bit through my machine. It kept getting stuck and would not move. I had to push it through with a pencil) Your choice. It works either way.

When you are pinning your straps to the mask, remember to pin it with the straps going into the mask because you will be turning it inside out later. I’m telling you this now because I made this mistake. Learn from me.

The tutorial I used was this one by Mimi G Styles (the actual tutorial doesn’t start until 3:39):

The reason that I liked this tutorial was because most of the tutorials with in this particular style always had the straps going behind the ears. I prefer the mask that tie behind the head and not behind the ears. The good thing about this mask is that it looks much cooler and it fits much better on the face than the pleated one. The challenging thing about this mask is that you will be sewing in a curve. It was my first time sewing anything on a curve like that and it did not turn out pretty but the shape is still there, which is what you want.

Again, the tutorial was calling for elastic but I, as it happens, still do not have elastic. If you also do not have elastic, you can use the same tutorial I gave you on how to make straps from the pleated face mask, however the dimensions will be different. The length of the strap would be 54 inches long and the width would have to be 1 inch wide. If you don’t have fabric that long, that’s okay, you can just sew smaller lengths of cloth together to make a singular strap of 54 inches in length. What I did to thread it through the edges was to have the loop at the bottom and then have the top part be where to tie it to your head.

Here are my end results: 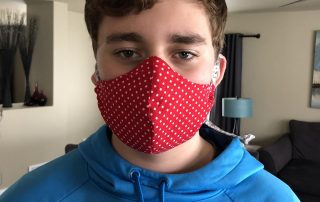 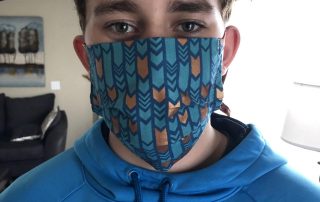 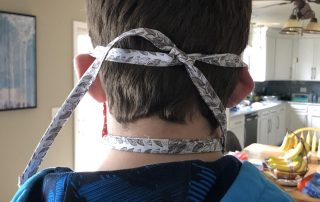 They turned out alright, I think. Now, I want to see you guys try ones of these out. You can send us pictures on Facebook @antiochpld, Twitter @The_APLD, and on Instagram @antiochpld. We would love to see your masks!

P.S. Thank you Noah for modeling the masks!