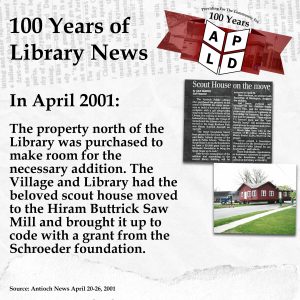 Scout House on The Move

The Antioch Public Library Dist. Purchased the property to the north to provide the room necessary to build an edition. Not wishing to destroy the beloved scout house, the Village of Antioch and the Library will have it moved to the Gage Brothers Park and Hiram Buttrick Sawmill on April 26.

“The (new) foundation hasn’t been poured (for the scout house),” said Kathy LaBuda director of the Antioch Public Library. “When the Scout House is set on the foundation, we have a $20,000 grant from the Schroeder Foundation to bring the Scout House up to code.”

Bids for the construction of the addition and remodeling to the current library building will be accepted on April 30.

Alan Armbrust, an architect with Ruck/Pate of Barrington, designed the addition. Lori Bruce, publicist and member of the Antioch Public Library Dist., said the remodeling project and addition is “a gateway to knowledge for business, for education and for pleasure.” There will be T-1 internet lines, and the “user friendly layout” will accommodate small groups for seminars and entertainment opportunities.

Bonds have been sold in the amount of $3 million netting the library district $2,942,785.70 for the project

“We’ve created a foundation (Foundation for the Development of the Antioch Public Library) for our fundraising,” said LaBuda.